Amritsar, the Indian city famous for its temple of Gold. Being an Indian, and not visiting this place for so long was infact a great miss for me.  So, to start with the travel season, nothing could have been better than having Golden Temple as top priority in your Itinerary.

Leaves Sorted, Tickets booked and I was off to the beautiful and energetic City of Amritsar. Amritsar, being the Heartland of Punjab and Punjabis, is a fun and energetic place to be. It was a cold winter evening, and just after landing at Amritsar, I checked in my hotel room, dropped my baggage and went to the most awaited destination- Golden Temple. The temple was just 2.5 kms away from my place of stay, hence there was no issue reaching the place.

To begin with the temple premises was quite large, and on the outskirts were many shops, and nice pedestrian road and a lot of people strolling in the winter night. To my surprise, despite so many people there, the cleanliness of the place was commendable. I enjoyed strolling all the way to main temple.

My first view of  the temple, and I was awestruck. The glittering temple in gold, with its reflection in water was a sight to behold.  The holy water pond, which surrounds the temple in all the sides was glowing with all the reflections of light. People were sitting in all the corners, and enjoying the peace and serenity. I too had some own time of peace and silence. 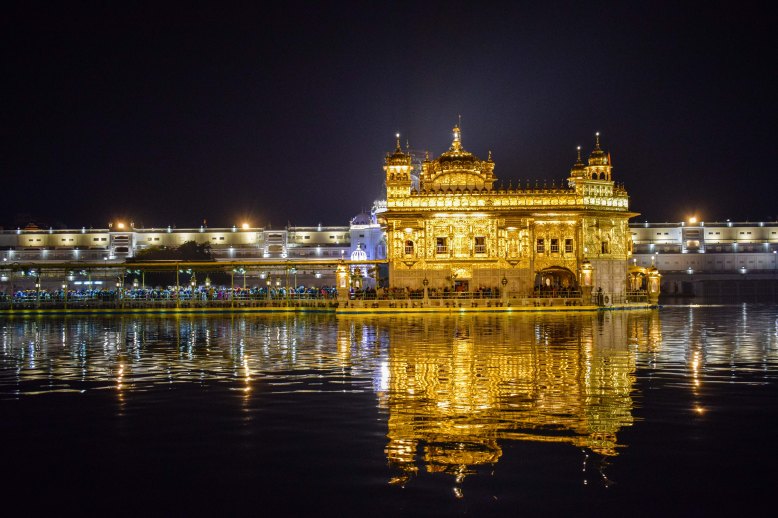 Later on the evening, I went towards the Langar Hall (a communal free kitchen of the Sikhs). The kitchen serves 70,000 free meals a day to all the devotees. Though the tradition of langar is common at all Gurudwaras, but the one at Golden Temple is always special. The meal was served with hot Rotis (flat breads), Dal (lentil Soup)  and Kheer (Porridge). 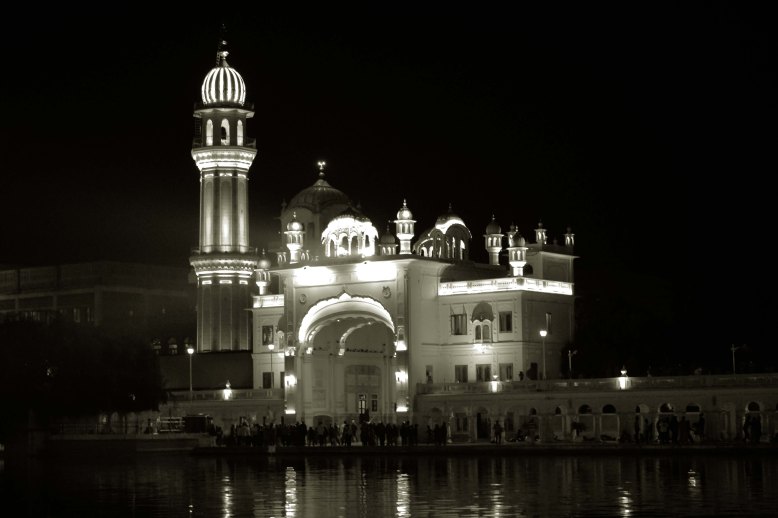 This marked an end to the evening, and I returned to my hotel room and retired.  The next day was a fine sunny day. After the breakfast, I went to visit the Jalianwala Bagh, a living example of the 1919 massacre by the British against Indian Freedom Revolutionists. The bullet marks, the Martyr’s Well still narrate the horror story of the time.

This was followed  by a visit to the Indo-Pak border at Attari, also known as Wagha Border to witness the Beating Retreat ceremony. This was indeed a full patriotic Experience. The BSF of India puts on a great show on this 45 minutes ceremony. After the programme ended, the evening again called for another visit to the magical Golden Temple.

My 2nd evening at the Golden Temple, also known as Harmandir Sahib, was different than the previous night. This night rather than clicking pictures of the majestic view, I decided to explore more of this place. The priority was to join the long queue, and get a glimpse of whats inside this temple of gold. So, I joined in the crowd, and slowly marched forward. I made it to the main temple in about 40 minutes. Inside was a musical and religious environment with people seeking blessings from Wahe Guru.  There was also a group just outside the main temple sitting and chanting some religious songs. I just joined in, and spent a good hour praising the glory and heroism of the Gurus, which the song apparently meant. Though it was tough for me to understand the entire song, but with my limited knowledge of the language, I could figure that out. It was also amazing to experience how music acts as a source of unity for people from different sects. For those moments I spent with them, it felt like it was my song, wishing I could also sing with them.

Later on the evening, I kept strolling at the streets outside the temple, mentally preparing myself for the upcoming destinations. Thus, my 2nd evening at the Golden Temple and the tale of Amritsar ended on a peaceful note, with a wish to visit this city again.

If you enjoyed reading this, please show some love on the comments section below, and follow me on my instagram handle @wanderersjunkyard

9 thoughts on “Amritsar- the Golden way.”